Barcelona, 29 March 2022 - After three and a half years of research, the European-funded Center of Excellence for Exascale in Solid Earth (ChEESE) has succeeded in preparing simulation codes and applications as geohazard mitigation services that can be used to support the private and public sectors in decision-making related to earthquakes, volcanoes, and tsunamis. The potential services, proven to run efficiently on present pre-exascale prototype supercomputers, were carried out as demonstrators in operational environments.

“The work carried out by ChEESE has been a huge undertaking. We prepared 10 European Solid Earth flagship codes which were then tested as potential services on urgent computing, early warning forecast, and hazard assessment,” said ChEESE’s coordinator and Barcelona Supercomputing Center (BSC) and Spanish National Research Council (CSIC)

Professor Arnau Folch. “We also collaborated closely with civil protection agencies and warning centers to fine-tune these demonstrators, making sure that we created services that addressed their needs. By making the services compatible with upcoming exascale infrastructures, we are making sure that they will work faster and more effectively when these supercomputers are deployed.” 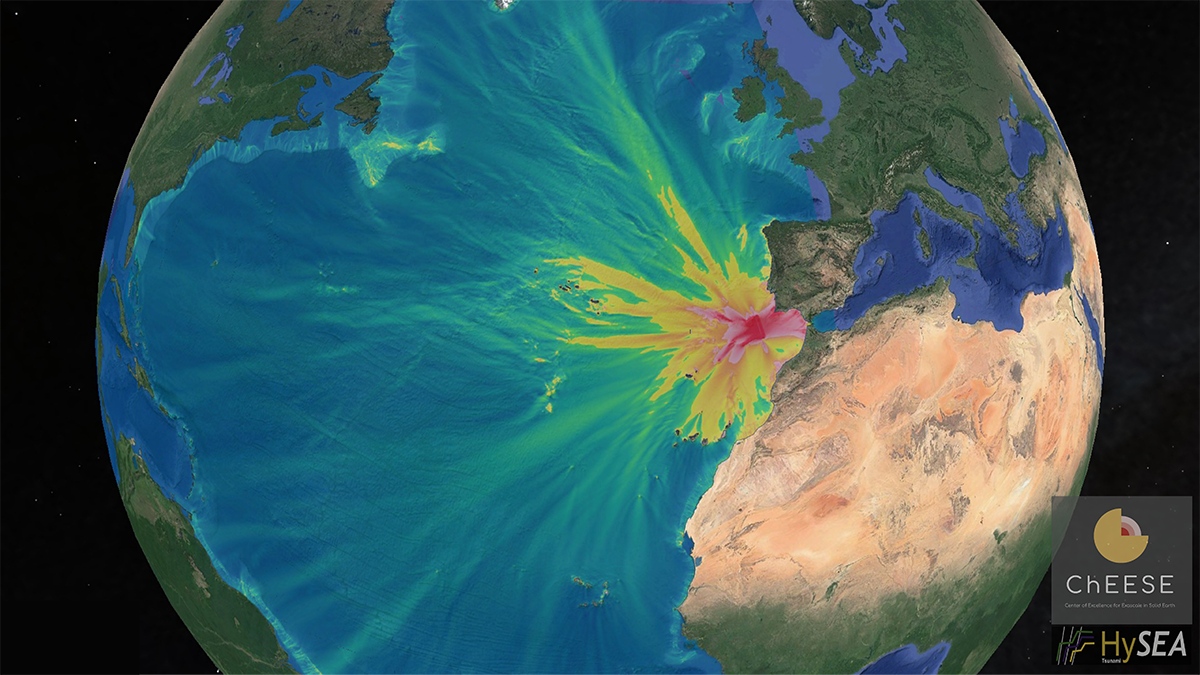 Maximum wave height for a simulation of the tsunami generated by the 1755 Lisbon earthquake.

The potential services that ChEESE has developed have been tested on high performance computing facilities such as the Barcelona Supercomputing Center’s MareNostrum 4 (Spain), the French Alternative Energies and Atomic Energy Commission’s Joliot Curie (France), the Leibniz Supercomputing Centre’s SuperMUC-NG (Germany), CINECA’s Marconi 100 (Italy), and the Swiss National Supercomputing Centre’s PizDaint (Switzerland). The specific functions of these services include:

ChEESE’s service on urgent computing was used during the Cumbre Vieja volcano eruption on La Palma Island in the Canary Islands. ChEESE coordinated with the PEVOLCA (Special Plan for Civil Protection and Emergency Attention for Volcanic Risk in the Autonomous Community of the Canary Islands) scientific committee to mitigate the effects of the eruption by providing daily operational forecasts with the help of the MareNostrum 4 supercomputer at the Barcelona Supercomputing Center. With the resulting forecast information, local authorities could make informed decisions such as local airport disruption forecasts as well as deciding on population confinement measures based on the air quality.

“Using our service in a real operational environment demonstrated that our work can directly impact the lives of those affected by natural hazards. With ChEESE drawing to an end, we are happy that the project’s methodologies, workflows and objectives in geohazard mitigation will continue to be developed and addressed by other European projects like eFlows4HPC, DT-GEO and GEO-INQUIRE,” said Folch.

The ChEESE project has received funding from the European Union’s Horizon 2020 research and innovation programme under the grant agreement Nº 823844.