Participants connecting from Europe, Asia, North America, South America and Australia were introduced to high-performance computational seismology software packages ExaHyPE, Salvus, SeisSol and SPECFEM3D and were given an overview of their similarities, differences, and areas of applicability. Unique and in-depth half-day practicals were provided for each package, with computational resources provided by HLRS. Participants were also encouraged to pre-record one-minute lightning talks about their research, which were played during each day´s lightning talk session.

The main talks were recorded while the practicals, which took place in breakout rooms, were not. View the recordings here:

View some of the presentations here:

Introduction to Zoom and Cluster

News
From research to societal relevance: How ChEESE and urgent computing may enhance INGV´s hazard forecasting 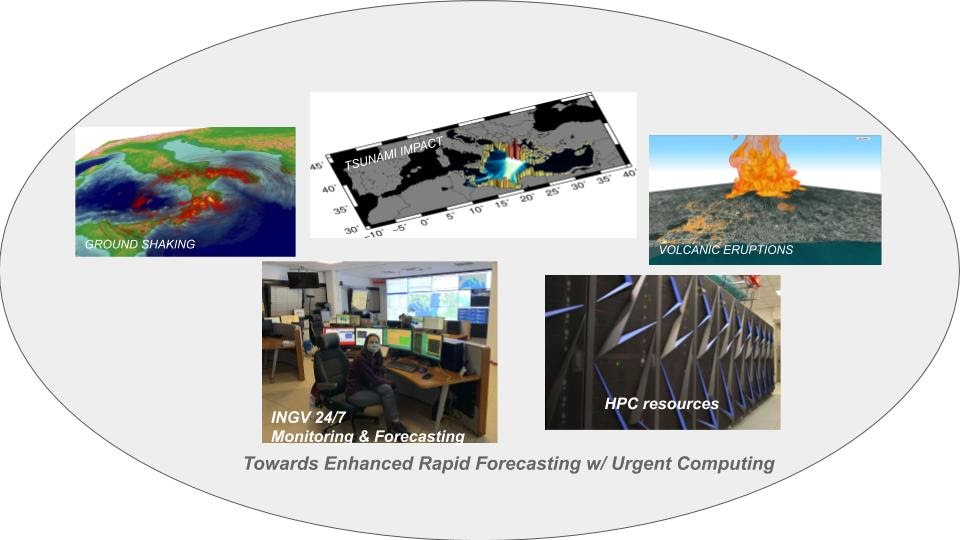 One of the partners in the ChEESE consortium is Istituto Nazionale di Geofisica e Vulcanologia (INGV), the largest Italian public research body operating in the field of geophysics whose activities span from fundamental to applied research. The institute plays a role of direct societal relevance by being in charge of both hazard assessment and 24/7 real-time monitoring, early warning and forecasting for various geophysical phenomena.

In particular, the monitoring activities include observatories for all principal Italian volcanoes, a seismic observatory monitoring earthquakes at the global level, and CAT-INGV, which is a tsunami warning center. The volcano observatories are involved before, during and after volcano activity phases. The seismic observatory analyses significant earthquakes and continuously disseminates earthquake information such as when and where it happened, its magnitude and its effects. CAT-INGV is in charge of monitoring and alerting Mediterranean countries in the event of a potentially impending tsunami following a strong earthquake offshore or close to the coast.

Data and analyses from long-term hazard assessment are regularly distributed to the public institutions concerned, to the scientific community, and to the public. Hence, INGV is largely a crucial part of the risk management process of natural hazards in Italy and Europe. For example, INGV hazard monitoring and assessment services directly address the Italian Civil Protection Department, the Volcanic Ash Advisory Centers, the European Emergency Response and Coordination Centre through ARISTOTLE, and the IOC/Unesco Member States through the CAT-INGV tsunami warning center. The general public receives hazard and disaster-related information through the INGV official web site, dedicated apps, and on the social media. For example, information can be searched as “INGVterremoti” and “INGVvulcani” respectively for information on seismicity and volcanic activity. An interesting feature is the dissemination of automatic earthquake locations on Twitter.

INGV and other partners, such as the Barcelona Supercomputing Center, Norwegian Geotechnical Institute, University of Malaga, and the Icelandic Meteorological Office, are working together to implement workflow for modelling natural hazardous phenomena such as shaking, inundation, and eruptions at an unprecedented scale and resolution. In this way, ChEESE is fostering a future dramatic improvement of the near real-time hazard assessment and hazard forecasting services, with enhanced societal relevance. Thanks to these simulation tools developed within ChEESE, INGV is exploring the possibility of enhancing 24/7 monitoring and hazard forecasting services through urgent computing at the exascale. During a crisis, the use of Tier-0 supercomputers, in urgent computing mode, to run these hazard forecasting workflows informed with real-time data from observatories would allow dealing with a potentially impending disaster in manageable and useful run time. Risk management during an impending or just after a disaster needs to be fed by the most accurate and rapid information available to support a critical decision like calling for an evacuation, deciding whether to displace the population, or how to efficiently use available assets for post-disaster recovery operations.