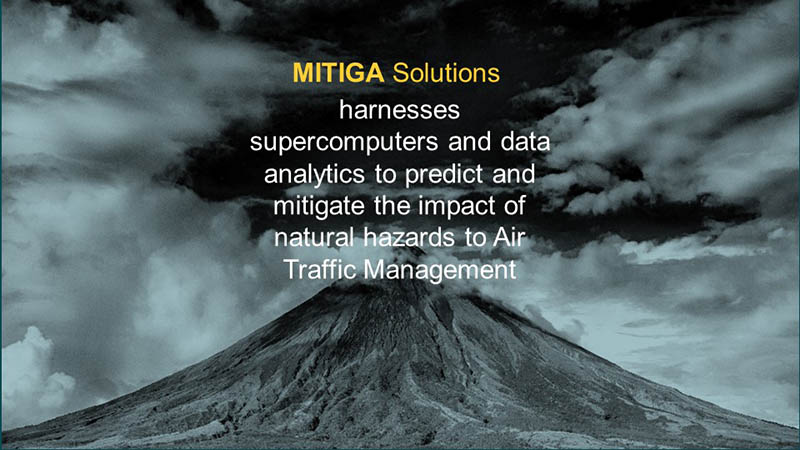 About 90% of the most in-demand flights travel over high-risk volcanic areas. On average, ash-forming eruptions cost more than $500 million in losses per year to airlines, and eventually billions of dollars to related aviation stakeholders (engine manufacturers, insurance, service providers). Atmospheric dispersion of hazardous substances influences many economic markets and poses a variety of problems to different segments of the aviation industry. In the last decade, regulation frameworks for air navigation changed to allow airlines to decide whether to operate under volcanic ash contaminated airspace and the European Aviation Safety Agency (EASA) has required engine manufacturers to certify engine susceptibility to volcanic ash and other hazardous pollutants. In this context, a gap exists between available information on dispersion of hazardous substances and industry needs at operational level, creating a market opportunity. Aeronautics is one of the EU’s key high-tech sectors in the global market. It generates around €220 billion, providing 4.5 million direct and indirect jobs. The European Union is a world leader in aerospace products and aeronautical technologies are catalysts for innovation contributing to the growth of the EU economy as a whole.

MITIGA Solutions is a spin-off of the Barcelona Supercomputing Center (BSC), the national supercomputing facility in Spain, the coordinator of the ChEESE CoE, and a world-renowned institution with extensive experience in developing and implementing supercomputer models in the fields of geophysics, volcanology and atmospheric impacts.

MITIGA has developed an Impact Calculation Engine (ICE), that is being used in an in-house operational high performance computing (HPC) software. It is capable of providing customer-based commercial solutions for air traffic management (ATM) during hazardous scenarios caused by the presence of volcanic ash and other aerosols in the atmosphere.

Inside of ChEESE CoE, there are different defined pilot demonstrators (PD) and codes that are related to volcanic ash clouds dispersion. Some of them may have a direct impact on MITIGA’s services quality: